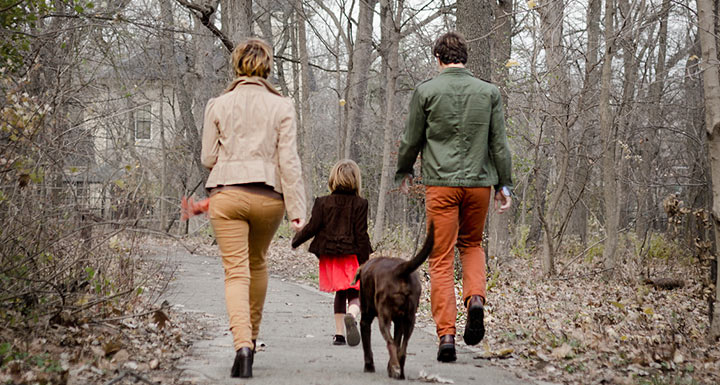 I stopped just shy of “dilapidated” when describing the house on the corner. The exterior looked as though it’d been threatening to shed its minted green paint for years, and the yard was more dog-trodden earth than green grass. Three black dogs anxiously patrolled the perimeter, making it one of those houses I dreaded passing on our walk, when I knew my dogs – who normally trotted, serene and workmanlike on either side of the stroller – would be stoked into a maniacally barking, territorial frenzy.

The sole non-canine inhabitant of the house emerged only occasionally. Petite and sheathed in bulky cardigans even in the heat of a Missouri July, she just had a hermit vibe about her. Yet I was intrigued by the license plate on her hulking SUV – “ALL ONE,” it read.

It was our dogs, of course, who initiated our friendship. I was several months pregnant with a toddler in tow, and both of our dogs had a wily habit of finding ways out of our backyard. She walked them back several times, and then we exchanged numbers. She worked from home and offered to host a puppy playdate for our larger dog, Tinkerpaw, to give me a break. In fact, she offered to do so every day, and, of course, I took her exactly at her word.

It was the first time I learned a friendship with Susan was a delicate dance that often took two steps back before it took a step forward. She flitted and ducked away from intimacy and social ease like someone who’d been burned, or at least someone who’d never enjoyed the consolation of blending into the majority – first as a black woman who’d acquired an advanced degree decades ago, and now as a middle-aged, childless divorcee. She called me a few days after I’d begun enthusiastically ushering Tinkerpaw up the street each afternoon and rescinded her offer.

Several months passed during which I gave her a wide berth, waving while walking the dogs but otherwise seeing her only upon the dogs’ occasional jailbreak. On one of these occasions, she’d called me to retrieve them, and I walked up the street without Tinkerpaw’s collar. She hesitantly offered me use of her dearly deceased dog, Eddie’s collar, which I profusely promised to return safely.

Oh, had I only removed that collar from Tinkerpaw’s neck a few days later when he impatiently scratched at the door to be released into the yard. He leapt over the fence and was off. We caught him a couple of hours later, and I remembered that he had had Eddie’s collar on, and now it was gone. I panicked, much to my husband’s bafflement. “It’s just a collar,” he said. “Can’t we just buy her a replacement?” “No,” I replied. He didn’t understand. “You don’t know Susan as well as I do,” I pleaded, near tears. As I struggled to make him understand how very nearly catastrophic this was, how attached she was to her dogs – we searched our neighborhood for a good hour, in vain.

I put off calling her for two days. Finally, my pulse pounding, I dialed her number and awaited the inevitable answer. She was always home. When I explained what had happened, there was silence – an incredibly hefty, crushing silence. Then she said, “I need to go. I can’t talk to you right now.”

It felt very heavy and strangely intimate, gravely disappointing someone I hardly knew. As much as I tried to convince my husband he didn’t know her like I did, the truth was I didn’t really know her at all. I’d never been inside her home, I didn’t know anything about her beyond what I saw from the sidewalk gate.

I am an artist by trade and in an effort to make amends, my husband suggested I draw a portrait of Eddie. I requested a photo reference from a still warily circling Susan. She didn’t say much when I finished and delivered the portrait, but her smile was like a balm to me.

A few months later, we both spotted the large golden dog roaming the neighborhood. I even noticed Susan giving him refuge in her yard a few times, and this friendly vagrant had a habit of following me about the ‘hood as I walked my dogs and toddler. One such day I crossed at a crosswalk only to hear the near simultaneous sounds of a heavy impact and a car squealing to a stop. I turned around in horror to see a truck had run over the dog Susan told me she’d named “Goldie.” Mostly helpless to assist with two dogs of my own and a toddler, I was relieved when a woman across the street came rushing out of her house, calmly and expertly handling the situation. There was something so tragically sad about seeing this animal, its legs broken and blood pouring from its mouth, struggling to right itself. After seeing the dog driven away to a local vet, I walked on, badly shaken.

When I turned the corner to walk down our block, I saw Susan standing in her yard. She waved, and I started crying immediately. She rushed up to me, and I explained through my blubbering what had happened. She hugged me. It remains one of the best hugs I’ve received because I don’t imagine it was easy for her to give.

Shortly after, Susan moved away. She promised to call with her new address, but she didn’t, and I neglected to call her again as we also moved a month later. As we said goodbye she said to me – totally exhausted and hugely gravid, wrestling with a highly energetic toddler and getting to that point in pregnancy where I was simply done – that I was taking the “right” path. She wanted to have children and always told herself she would, but then a career took precedence and divorce dismantled that dream and now it was too late for her. Suddenly my late third-trimester moaning and complaining seemed ridiculously petty.

Through Susan, I learned friendships don’t always follow the smooth, steadily upward sweep from mutual likehood to increasing intimacy. Sometimes our relationships are marked by fits and starts and awkwardness which are ultimately transformed. Although I’ve been blessed with a few easy, automatic, fated-feeling relationships – my husband and our three-week courtship as well as my best friend of 16 years come to mind. In my erratic friendship with Susan – one in which none of my customary superficial social graces seemed to work (as Susan simply didn’t deal in small talk or politesse). I was finally forced to be real. And that is the place where I met this meek, unassuming, cerebral woman with coke-bottle glasses that magnified her eyes and a guilelessness that magnified her heart.

Ashley Lande is an artist, wife, and mother to a son, Israel aka Izzy Rae, and a daughter, Arrow. She and her family recently moved from midtown Kansas City to the rural high plains of Colorado where she attends the Lamar MOPS group. She has worked as a staff reporter for the Kansas City Star and as a freelance writer.

Do you have an unlikely friend in your life? How did you meet?
SHARE THIS STORY