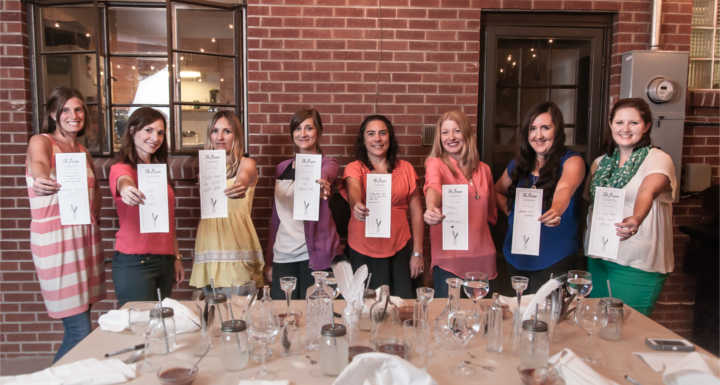 Candles flickered and lights twinkled overhead as each woman took her turn sharing her brave. The moment was more than we ever dreamed when our brains mustered the idea of The Brave Collective.

Before everyone arrived, there was a scurry to check the table was decorated just so. Most of the food had been prepped, but the potatoes needed to be boiled and the mousse prepared. The schedule allotted time for Dalley to nurse.

That’s how the pioneer gathering of The Brave Collective started. A group of women sitting around a table talking about their brave didn’t require decorations or a fancy meal. But as the start of the greater Brave Collective, it needed commemorating.

Potatoes were smashed, beef au jus strained into ramekins, chocolate mousse put to set. Dalley’s husband arrives with the kids, the little one is ready for mom to nurse.

We sit and Dalley welcomes everyone into The Brave Collective.

“I wanted to host The Brave Collective because the space shared by women is sacred. There is strength in our vulnerability, and I’m honored to be a part of a group willing to put themselves out there and see what is possible.”

Before talks of bravery began there was food, the universal builder of community. And talk of where each person started life. It’s a simple question, but our stories are important because each person’s moment of bravery comes from their story.

“As each person shares their brave, please know I respect each of you, both for sharing and deciding to go on this journey together.”

Melissa: I never wake up well in the morning. When my daughter calls for me on the monitor in the morning I make an unhappy face at the fact I have to go in to get her instead of warmly greeting her and my husband in the morning.

Jackie A.: I had an idea come to me that I have tried every way possible to get out of, but it keeps coming back. I was reading this morning in When the Heart Waits about the idea of “dying to become.” In order to further become, I must lay to rest who I was. Writing my stories will help me close some of my previous chapters so I can continue to become.

Mandy: I have two things. I am going to get a stress test. My dad died unexpectedly of a heart attack at the age of 47. It might be genetic, and I’m afraid. The second thing is I am going to take time to do something I enjoy every week. My mom was so absorbed in raising us kids that she didn’t end up with much of herself. I see her patterns in me, so even though it feels selfish, this is important.

Brandi: I feel like I have been hearing the same prompting in my life, even though I’m not sure it’s a prompting I want to hear. What I keep hearing is I need someone to give me perspective. I am going to find a mentor or someone who can speak into my life.

Jackie F.: I have been reading The War of Art, and I’ve been frustrated by a question the author asks: if you were the only one on earth, what would you keep doing? I don’t know that I have an answer about what I really enjoy doing. Over the next six months I am going to pursue that. I think it means I will be trying a lot of new things.

Dalley: I am going to take better care of my nails. I come from a long line of women who pick and chew at their fingernails as a way to cope with anxiety. I want to stop the pattern.

Alyssa: I have never been someone who has struggled with body image, with much thanks to my mother. But after having two kids, I have been disappointed. I want to train and compete in a triathlon, not to make my body into what I wish it was, but to appreciate all the things my body can do.

Mikkee: I decided to do three things in the next six months I have never done before. I keep talk-ing about making watercolor notecards I saw in a magazine, and it will be my first brave attempt.

Design inspiration and recipes for our meal in Denver can be found on the Pinterest board.

When you join a Brave Collective you’re joining women everywhere in living into our fullest. There are many ways to get involved – you could host your own Collective, join a local group or follow along as we help launch other Collectives in Denver, NYC, Nashville and Los Angeles.

We’ll be all over the Hello, Darling blog, YouTube channel and Pinterest as we highlight women around the country joining the movement into bravery.

We hope you’ll join us.

Whose brave do you resonate with most?
SHARE THIS STORY