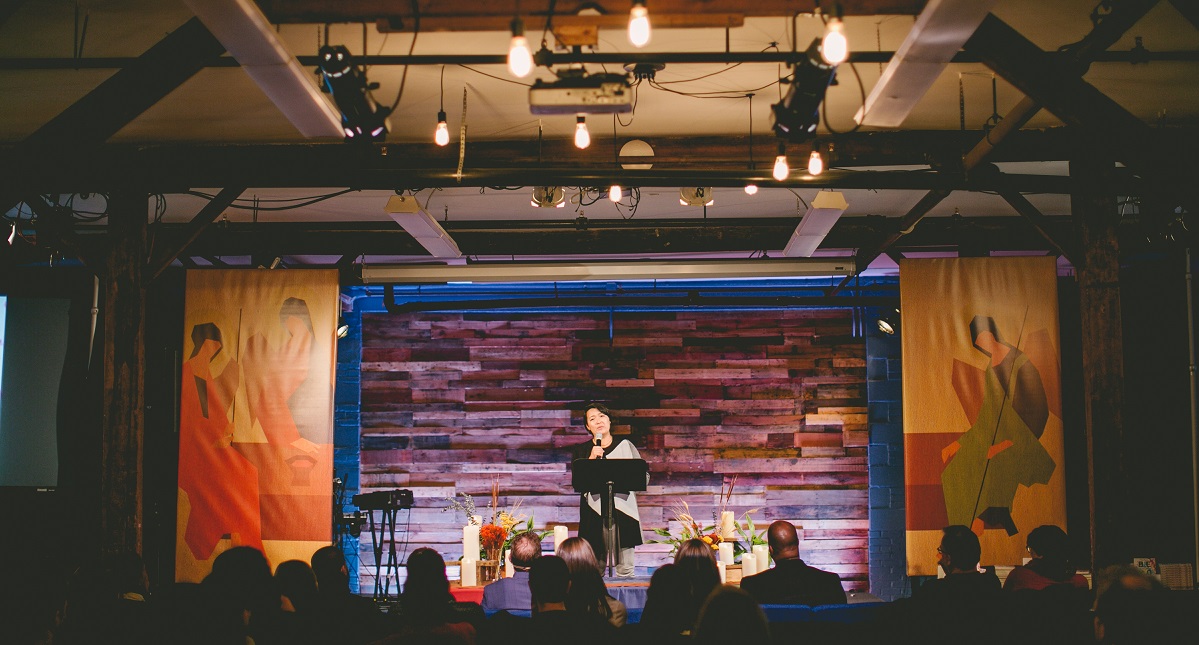 Sarah Shin is our Mainstage Speaker for Session 2.
Check out the MOMcon 2018 brochure for more info!

When I speak to a room about ethnicity and race, I’m often speaking to a group of people who are unaccustomed to being led in the conversation by an Asian female face. I can almost feel the questions they are silently asking as they try to anticipate what I will say. Will she say too much? Will she say too little? Does she get us? Is she with them? Whose side is she on?

In a world where your look automatically brings up assumptions about the polarized camps that exist, it’s difficult to talk about ethnic healing and racial reconciliation. There are minefields everywhere, replete with hurt history and broken relationships and systems.

To some, my face represents a known entity, an ally or friend; to others, a stranger or an ethnic other, or a people with whom their family has clashed.

As I navigate training college students and churches, the news and world of social media shout the Enemy’s pressuring, tempting lie: Pick a side (and choose your enemy). We may all feel this to some degree. In the race conversation, the delineations form quickly: people of color versus white, “woke” versus “non-woke,” conservative versus liberal.

Asian Americans often do not fall neatly into one or the other category. There is rising awareness in Asian Americans about racial injustice, but for the most part, that awareness is not cultivated until college. If they are unaware, they don’t engage often because public conflict is discouraged in our cultures. Or there is a lack of reflection on how the issues around us intersect with our own family story.

In addition, we have our own scars. I’ve experienced rejection from my own people for not being “Korean enough,” racism from white people, and racially prejudiced remarks from black and Latino people. This is true of many Asian Americans.

Reconciliation that is centered in Christ is not a liberal secular agenda; it calls people to personal righteousness in relating to others and a righteous way of living as a just society. A society that welcomes Gentiles and Greeks, Philip (a eunuch) and Rahab (a prostitute), and Jew and Samaritan to live a communal life that reflects the justice and shalom that God will one day fully bring. Reconciliation modeled after Jesus’ intentional engagement with the Samaritan and Jew and Paul’s outreach to both Gentile and Jew actually offers something that our society does not see as an option: the uncomfortable space of the middle; the bridge-builder between ethnically separated people. Let me clear this up. This is different from “not taking sides,” which is a kind of neutrality that doesn’t repair anything. Bridge-building connects sides and silos. It breaks past our echo chambers.

This is where not falling into neat categories as an Asian American woman feels like a gift to me. I can be a bridge builder that occupies the uncomfortable space of the middle. I weep with and advocate for black and Latino friends. I create safe spaces to encourage white friends to share their fears and questions after which I can lovingly challenge them to change and steward access and power for the good of all. I can mentor and help shape the values of Asian sisters and brothers who have often had few guides that look like them in this conversation.

Though I experienced scars in my ethnic experience, there is great beauty in my story that has been a gift to others. I was taught to love my heritage by my parents, with a mother who would proudly tell me about Korea’s rich history and its story of suffering and oppression at the hands of the Japanese occupation. She taught about Korean culture, food and history at summer culture camps for adopted Korean children. She never saw them as not Korean; those children were a part of her people. She taught me that ethnic heritage and history is valuable, worth learning and exploring and sharing with others.

I have been able to pass on this wisdom to many people of color as well as white women and men: God created you with an ethnic heritage that he wants you to steward. It’s been amazing to see ethnically self-aware white women and men humbly and courageously steward their story, power and privilege for Kingdom purposes in multiethnic spaces as a result. My most significant spiritual mentors have been black women and men, whose keen awareness of the beauty and suffering of their people have helped me reflect on my own.  I learned from their story which is so different from my own, yet it helped give me greater confidence and conviction as a leader.

I remember having a conversation with my parents and in-laws about police brutality of black Americans. I was able to help connect the issues raised in America to the student protests that they participated in during the 1970s against an unjust administration in Korea. Valuing my ethnic heritage helped me draw connections in ways that I could not if I tried to engage my family in a “black” way or simply an information-centered, cerebral manner. Empathy via shared experience is a much more powerful bridge-building tool.

We need prophetic voices, people that press the envelope, people that protest, people that call for change.  But in order to avoid the echo chambers happening in our country and in our Church, we need to be able to build the bridges to hear, to grow and become what we COULD be.

Accepting the distinct and unique ways that God has shaped me in my ethnicity has helped me to be a stronger leader and guide, not just to my own ethnic community, but to many others. When we are aware of who we are, both in terms of gifts and blinders, that awareness awakens deeper learning, humility and partnership with others. May that be true of each and every one of us.

Sarah Shin is associate national director of evangelism for InterVarsity Christian Fellowship. She is a speaker and trainer in ethnicity, evangelism and the arts, as well as a fine artist and painter. She is the author of Beyond Colorblind Redeeming Our Ethnic Journey. Sarah and her husband live in Cambridge, Massachusetts.

This article currently appears in the spring issue of The MOPS Magazine.