Courage to be … Video Stories 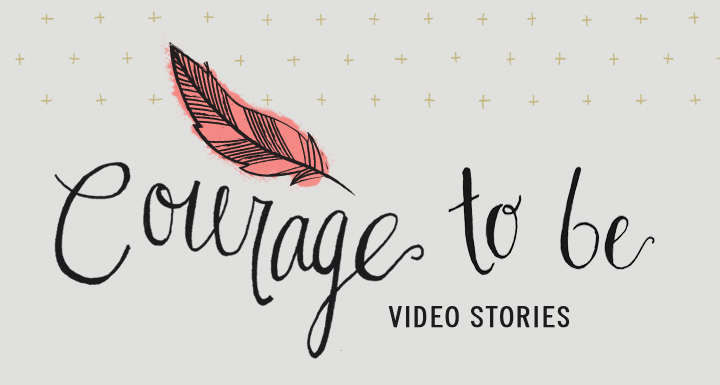 We were talking about courage recently and a friend pointed out that many of our most beloved and inspiring stories are those of courage.

It’s like we can’t help ourselves when it comes to watching stories of people find the strength to overcome.

That’s why we put together the Courage to be … Video Stories.

With a small video crew, we took to the road to capture the stories of 24 people who are living courageously. The courage of each looks different – because courage comes in every shape, size and flavor – but each story inspires us to dig within and find the courage to do that next step we’re being called toward.

It’s amazing what happens inside of us when we hear someone else’s real-life story of courage. It can be the tiniest spark to start something new. Or maybe it’s a little bit of fuel to fan flames already existing. At absolute bare minimum, it’s a shot of good feels.

“I have the courage to be … “ Parts 1 and 2
These videos are the speakers from the Courage to be … Video Stories introducing each of their topics. It’s a good reflection of what the curriculum covers. Each of the videos is about 1 minute long and is fun.

A copy of the Courage to be … Video stories is mailed directly to each registered MOPS group to show during meetings, but we wanted to make sure every MOPS Member has a chance to view all of the videos. That’s why we’re showing the videos in our Let’s Talk, Darling webinar series.

As we journey into what it looks like to Be you, Bravely this year, each registered MOPS Member received a welcome kit with lots of goodies to help along the way, including a Courage Key. And she’ll receive magazines throughout the year geared toward living bravely, and have access to the Courage to be … Video Stories.

Here is the official list of videos, and you can find the viewing schedule at Let’s Talk, Darling.

(PS – We’ll be auctioning off the artwork that was created int he Courage to Forgive and Be Forgiven and the Courage to be Too Much this spring, so be sure you follow us on Facebook so you don’t miss the giveaway!)

Have you seen any of the videos? What did you think? What have you been inspired to do?
SHARE THIS STORY