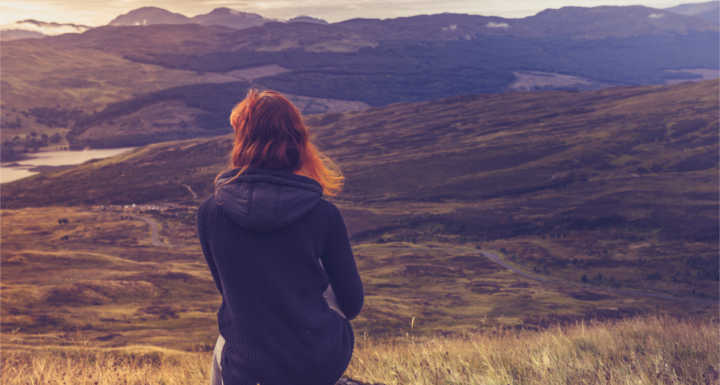 AfternooninColorado. The sun leans toward me as I drive along the edge of the prairie, just before it collides into mountains. Music streams from my window, babies doze in the seats behind me. And I cry – hard and alone.

I cry because honesty is a bitch.

Some days I hate it. I miss slamming doors for no good reason. I miss feeling justified.I miss yelling about dishes, even though it’s never about the dishes.

But there was one day, a monumental day of honesty when we decided to stay together. On that day, we made only one promise:we would be honest.

We believed love would follow in time. Six weeks later my husband split his helmet on a bike path. When he left the hospital a week later, he had changed. Our whole family crashed against that rock. And with the anniversary looming close, I am angry all the time.

We kept our promise. For a year since my husband’s personality changed we’ve said the hard and good things needing to be said. We don’t live in the terse, loud silence that was common before we committed to honesty.We are honest, like we used to be. But theusis irreparably changed, and today I’m so angry I can’t stop crying on the highway.

I am angryand the anniversary is almost here. I am certain the two are connected. The anniversary feels like a storm cloud is gathering in my home. I feel it. We decided to stay, we promised to be honest.

Then, I picture my social media feed. Lately the cocooned infants and Halloween pumpkins have been replaced by second marriages, old friends in new dresses with new husbands, declaringthisoneisthe love of their life. Those pictures strike a nerve. I have nothing at stake in their marriages. I can’t begin to know the details of another’s life, and goodness knows I understand the moments when leaving would make the most sense.

But I find myself angry about their new love. And angry they left, when I chose to stay.

I shouldn’t be angry, but I am. Because I miss my husband. There. I said it. I’m angry at those pictures because I miss the man standing beside me in my own new dress all those years ago. The boisterous passionate musician who never met a stranger, who kept our checkbook in his head and made decisions twice as fast as me. I miss who my husband was before his accident.

I cry because honesty is the release valve. And once I say, “I miss him,” out loud, I can’t stop missing who we were together. I pull over, lean against the steering wheel, and wait. In time the torrent passes.

I drive and listen to music and breathe for a while. Then I realize another truth: who he is now is better.

Now, he is never in a hurry. He has no musician’s ego. He has no agenda, except to hang out with our kids and sit beside me for a while. Now he is more humble and free, quick to apologize, willing to ask for help. We have learned – we are learning – to write the numbers down, to allow more time for making decisions. He still works, still runs errands, still rides his bike along the same path that is carved into our family history. But he is different, we are different. And even as I miss who he was, I know the man I am married to now is better.

I breathe deep and turn away from the mountains. We are making our way home. Tears dissolved my anger.

It’s been a year since we decided to stay. And a year since a rock crashed in the way. But we’ve made it – this far, at least – and who we are now is better.

Stephanie Gates is mom to four beautifully rambunctious little kids ages seven and under (passes to this zoo are free!) and wife to a guy who still makes her smile. Her journey has taken her to some remarkable places, and you are invited along for the ride. If you have ever abandoned religion in search of faith, ever had to leave your hometown to find your home, or ever climbed to the very tip-top of a jungle gym to rescue an overzealous toddler … then you know just what it’s like. Read what happens next A Wide Mercy.

Is there an experience in your life that makes you angry for how it has changed you or your family?
SHARE THIS STORY