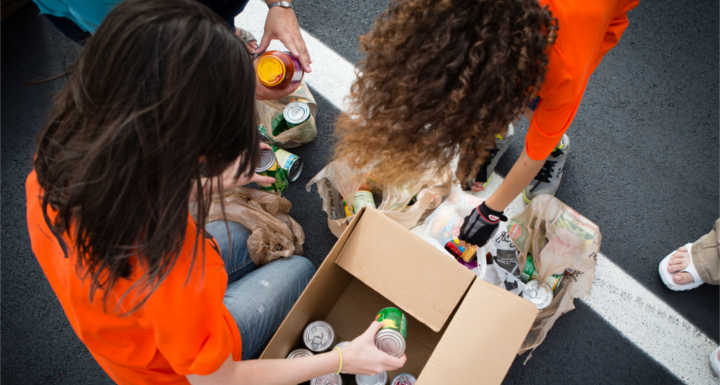 The call to Be you, Bravely is concurrently empowering and intimidating. We get that. Sometimes it’s hard to know where to start or identify exactly what is calling our hearts toward doing something brave. If you’re not sure what brave thing to do this year maybe it’s about slowing down to listen to your heart, or maybe it’s about trying out a few things, because sometimes it takes getting involved before we know we’re passionate. For those of you in the second category, we’ll be highlighting organizations doing impactful things in the world with opportunities to dip your toe in, getting involved right from your home. (For those of you in the first category, we hope you’ll follow us along in The Brave Collective and that the journeys of other women will inspire and orient you in your own calling.)

This month at Hello, Dearest, we want to introduce you to . Located across the United States, their mission is to feed hungryAmericans through a nationwide network of member food banks and engage American’s to fight to end hunger. is the largest domestic hunger-relief organization in the U.S. and helps provide food to over 46 million people each year.

It all began in Phoenix, Arizona, more than five decades ago when John van Hengel was volunteering in a soup kitchen. He met a mother who was determined to find food for her children and regularly foraged through grocery store dumpsters in the effort to provide meals for her children. She told John that grocery stores should donate the food someplace that could hold the food for when people needed it, like a bank holds money. Out of this conversation, St. Mary’s Food Bank was born. The first food bank in America.

The success of St. Mary’s caught on and within a few years, 18 cities had also formed food banks. In 1979, van Hengel started a national organization of food banks called Second Harvest, known today as . It is a network of 200 food banks across the country.

What is food insecurity?

The USDA defines food insecurity as “consistent access to adequate food is limited by a lack of money and other resources at times during the year.” The statistics are staggering, 1 in 6 Americans struggle with food insecurity. Don’t be fooled, poverty is only one of several factors that contributes to food insecurity. Unemployment is a better benchmark of food insecurity than poverty is.

Hunger impacts our ability to function well. Hunger and lack of proper nutrition can greatly impact children and the healthy development of their brains. Often, the food most affordable for those facing food insecurity are not the freshest or healthiest of foods. helps provide, not just food, but important nutrition to children and adults in need.

Here are some facts from the Hunger in America 2014 study:

How we can fight hunger

Chances are we all know (or have experienced) food insecurity. Being able to provide your child a healthy meal is a high value to every mom. Hunger is something kids can begin to understand at an early age and can be a way a family can serve together.

There are a variety of ways to help combat hunger in America. Everything from being an advocate to hosting a virtual food drive to volunteering, there is a way you and your family (or MOPS group) can make a difference for another mom and her child.

How have you been impacted by food insecurity?
SHARE THIS STORY