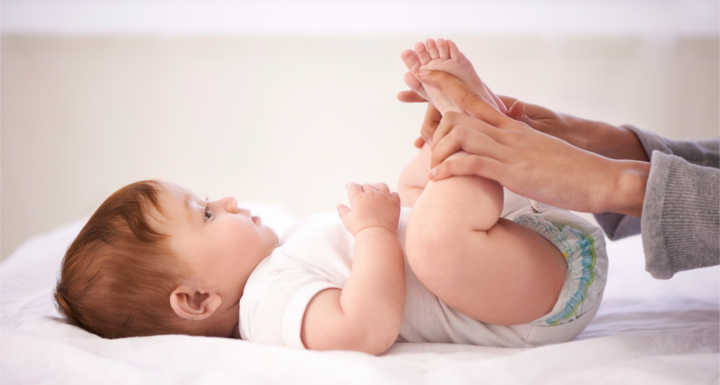 This month we are featuring fun experiments you can do with your baby from the book Experimenting with Babies. Babies are sweet and cuddly and full of scientific experiments. What will your baby teach you?

Your baby will be able to touch the toy with her feet about a month earlier than she can reach out and grasp it with her hands.

It’s long been thought that babies gain control over their bodies in a top-down progression. First, they learn how to control their head movements; then their arm movements; then, toward their first birthday, they learn to control their legs and feet in order to sit, crawl, and walk. But experiments like this one suggest that babies can control their legs earlier in the process than previously understood. In a 2004 study, researchers placed infants in a seat that allowed their arms and legs to move freely. During some sessions, they placed the jingly toy at the infants’ shoulder height and within arm’s length, toward the middle of their bodies, so that merely raising their arms would not make contact with the toy. During other sessions, they placed the toy at the infants’ hip height and within leg’s reach, also toward the middle of their bodies. On average, the infants were able to touch a toy with their feet at 11. 7 weeks, about a month before they were able to reach for and grasp a toy with their hands (at 15. 7 weeks). It is interesting that by the time the infants were able to touch the toys with their hands, they still spent an equivalent amount of time touching the toys with their feet, even though the hands have the ability to grasp the toy and the feet do not.

The researchers postulate that babies are able to reach for a toy with their feet before they can reach with their hands because of differences in the anatomical structure of the hip and shoulder joints. The hips have a limited range of movement compared with the shoulder, which might mean the degree of control required for intentional leg movements is less than for intentional arm movements. Because the arms have a greater degree of movement than the legs, this might also mean that not only are arm movements more difficult to control but also it is less likely that a specific pattern of motion will already be familiar to the child. As with adults, practicing a particular pattern of motion — for instance, a dance step — makes it easier to perform, and so the practice that babies get making a low number of distinct leg movements (relative to arm movements) may give their legs an edge.

Some people might be surprised by the results of this experiment, but any mom who has experienced the third trimester knows not to underestimate those tiny feet, which probably spent a good deal of time practicing kickboxing in her uterus. It’s natural to assume, though, that a baby would use her hands to reach for an object because that’s what older kids and grown-ups would do. But remember: Your baby’s developing body has a set of processes that have their own logic, which are not always what we might expect. Fortunately, as in many other cases, she’ll try to improvise.

Excerpt originally appeared in Experimenting with Babies. Shaun Gallagher shows parents how to recreate landmark scientific studies on cognitive, motor, social and behavioral development — using their own bundles of joy as the research subjects.

Shaun Gallagher is an author of two nonfiction books, “Experimenting with Babies” and “Correlated.” He is a former magazine and newspaper editor and runs the website Correlated.org, on which “Correlated” is based.

Experimenting With Babies: 50 Science Projects You Can Perform on Your Kid shows parents how to recreate landmark scientific studies on cognitive, motor, social and behavioral development — using their own bundles of joy as the research subjects.