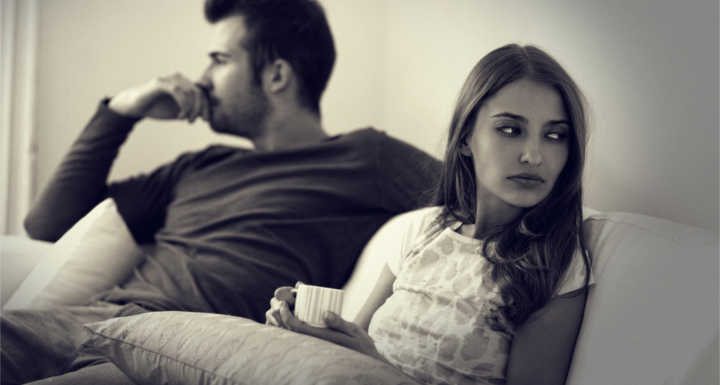 “Hi! You’ve reached Derek and Alex.” I could hear my own voice, recorded months earlier, filling the room. I’d been so excited to say those words, “Derek and Alex”—now one number, one unit. “We can’t come to the phone right now,” my voice continued.

I glared over at Derek sitting on my college futon that acted as the apartment’s central piece of furniture. I softly laughed, hoping that would break the tension. We couldn’t come to the phone right now, that was for sure; we weren’t in the mood to talk to anyone.

“Leave us a message,” my voice practically sang to the caller on the other line. BEEEEP!

“Well, calling to wish you a happy anniversary.” My father-in-law’s voice rang through the apartment. “Since it’s your paper anniversary, you’re probably out spending lots of paper money.”

“Ha!” I said, looking at Derek. You would think—out celebrating our first year of marital bliss! But no, we were fighting. Fighting about my disappointment with his anniversary gift: a wooden drying rack for the dishes. Fighting about the fact that he hadn’t made plans for us to go out that night because he assumed eating out the previous Saturday night counted as our celebration. Fighting about my generally critical attitude.

“Is this a joke?” I’d asked as I unwrapped the gift. I was almost speechless, but able to muster up that question.

“I thought you’d like it. I bought it at that kitchen store at Lloyd Center. You’ll use it every day,” he continued. His motives were probably thoughtful—splurging on something from a foodie store I liked but couldn’t afford to shop at—but his conclusions were dead wrong.

“Why do you always assume the worst of me? I thought you’d like it.”

It was the kind of fight where the drying rack started to represent his attitude about my role as the dishwasher in our relationship. And that morphed into his perception of my role as housekeeper in general. In his mind, my instant criticism of the gift characterized my general attitude about him. “You always” and “You never” started to fly around the room until we were sitting on opposite sides—him on the futon, me on the sheet-covered chair from my violet-decorated childhood bedroom—staring at each other in silence.

Our disappointments in the day were representing our disappointments in the last year. Like all newlyweds, we brought distinct expectations to the altar on our wedding day. Mine were based largely on Hallmark commercials and observations from the handful of lasting marriages I saw growing up. My senior year of high school, I’d lived in a newlywed home. My mom and Larry brought lifetimes of experiences and expectations to their relationship that offered unique challenges. So I didn’t see them as a realistic model for what marriage and its arguments looked like.

There was an upside to all the fighting. It indicated I was starting to feel safe enough to disagree. Derek had married me, and I knew he intended it to be for life. So I could let my guard down a little. I could start having a voice. I think he was relieved I was starting to have opinions.

“You don’t pay enough attention to me,” I said when my father-in-law was done leaving his anniversary well-wishes.

Derek’s face was a combination of disbelief and frustration. It silently barked, Are you kidding me?

I was starting to get desperate. Not sure really what I wanted to say, but we were so deep into the argument I was trying to claw myself out of the hole I’d created with my earlier words. To prove that he was at fault. For the situation. For my feelings.

“What do you want from me?” He was exasperated. How could he possibly meet all of my needs?

And that’s when I realized it. I really did expect him to meet all of my needs. I’d heard people say you can’t expect that from your spouse; you must turn to God to meet your needs. But that all sounded like a bunch of Christian noise. Besides, I was going to have a different kind of marriage, a “you complete me” kind of marriage. In the same instant that I realized my expectations, I saw how faulty they were. Two imperfect people cannot one healed woman make. Only Jesus could do that.

As clich as it felt, I was expecting Derek to be my Savior. Expecting him to fill the burning hole my father had left. To love me so intensely I would know my worth. When I say it now, it sounds foolishly unrealistic, but I’d lived so long thinking, When I’m married, then…

Realizing all of this, I was angry. Angry at him and at God. I knew my expectations were the root of the conflict, but I’d been working the last hour to prove how right I was and how wrong Derek was. It was hard to suddenly flip and admit my own blaring fault in the issue. I wanted to stay mad at him. Why couldn’t he be more than he was humanly intended to be? I knew it was ridiculous, but that’s what I wanted.

Derek got up and walked down the hall to our bedroom. As he walked by, I wanted him to stop. To apologize. But he kept walking, and I sat staring at the carpet. Left to pray, “God, helpme.”

This is an excerpt from The Artist’s Daughter. Used by permission. Revell Books2013.