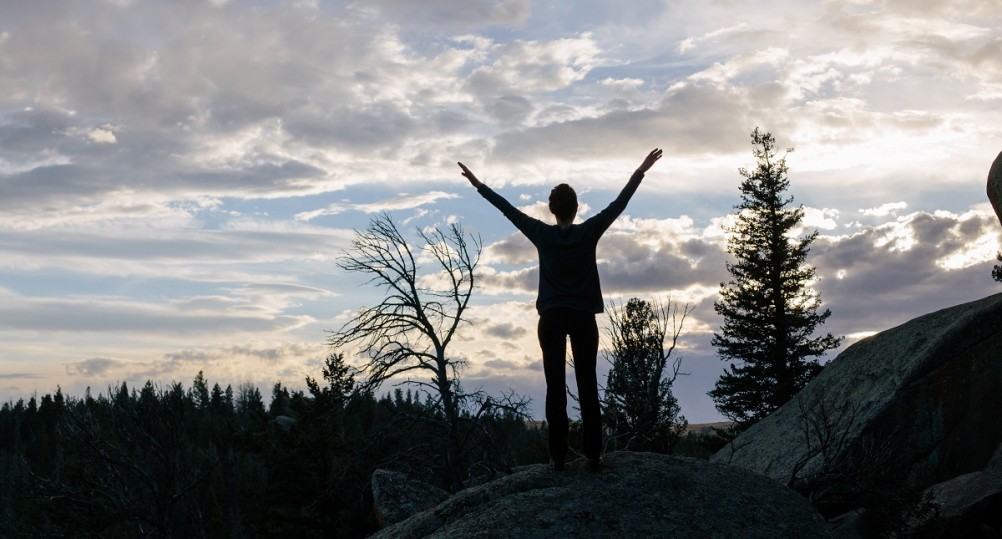 A year ago marks a turning point in my life when I said no to living in chaos and yes to living in peace. I didn’t know I was in a bad place; I thought I was coping. In fact, I thought I was actually hanging in there despite the culmination of events that led me feeling completely out of control. Without realizing it, I began to desperately cling to any ounce of control that I had.

In the past two years I had moved four times; back and forth from the U.S. to the Middle East, had a baby, lost my great-grandmother and grandmother, and my husband was working abroad in a dangerous location. My son and I moved in with my parents, only to learn they were moving, so we moved again; buying a place across the street from my parents’ new home. Not to mention, I had a hard time repatriating.

Change had become my normal, a constant barrage of never-the-same day led me to cling to routine, my safe haven. I did everything myself, never asking for or accepting help because I had to do things “my way.” Life was hard. I was a single mother that spent every waking moment concerned about my son. I was angry. I was parenting alone, my husband (my rock) was unavailable, my parents felt unreliable. Yet, I wouldn’t let my parents watch my son for fear that they might do something wrong. I became livid at little things like when my son would refuse to take a nap.

When I did have downtime, I cleaned the house, obsessively checked Facebook or browsed Pinterest. I was over-eating and over-drinking. Anything to escape. Anything to not deal with myself. I was filled with fear and anxiety; nearing a nervous breakdown. It never occurred to me that my life could be different even if my circumstances weren’t.

Thanksgiving was awful. I had this fantasy of making happy memories in our new home, so I was going to force it to happen. I planned a large gathering and told everyone to just bring themselves. I cooked and cooked and cooked and by the time we sat down to eat I hadn’t visited with anyone, my son was tired and wanted mama, and the turkey somehow wasn’t cook through. Hungry guests waited hours for their turkey dinner. I was exhausted and burned out; nothing went as I imagined. I told myself I’d never host a holiday again.

It all came to a head one night when my sister and I got into an argument on the way to dinner. I wanted to spend time with my sister but instead I felt that I needed to be home to put my son to bed. She was frustrated with my distracted anxiety and ended up calling me “a control freak who needed to be medicated.” The delivery was harsh but the message was clear: I couldn’t keep living like this, but where do I start? And could I endure more change?

When we were living in the Middle East (Kuwait), one Arabic word we always heard was “inshallah” (en-shAl-AH), which means “God willing.” Basically, whatever you’re talking about is in God’s control. It was said in almost every conversation and it was applied to just about everything. We’ll see you Monday at 9 a.m.? Inshallah. Is it going to rain today? Inshallah. Will my children get a good education? Inshallah. Will my husband be loyal? Inshallah. For me, it meant to let God have control. God willing I’ll make it through the night with this sick toddler. God willing I remember to pay all the bills on time. God willing Thanksgiving Day preparations go well, and God willing when they don’t, I can let it go and move on to plan B.

After the conversation with my sister, I realized that I needed God’s will in my life. I needed to live by inshallah. I needed to surrender to him and let him carry my burdens. I couldn’t control the circumstances of my life, but I could control how I lived in them. I could choose peace or I could choose anxiety, fear and chaos.

I learned that I needed more quiet time in order to digest the day and refresh my soul; so I put boundaries on commitments and company. Still to this day, almost every night after I put my son to bed, I am done for the day. I do not pay bills, wash dishes (sometimes I do a few) or do anything on my to-do list. I take a long hot shower, snuggle into my grey sweatpants and dive into a good book. And once a week I let someone else put my son to bed.

A year later, we moved again (I know!) and my husband has reunited with our family. More change, more unforeseen circumstances, more out-of-my-control life, but more often than not I feel at peace about it. If my son refuses to take a nap, he stays awake through dinner and I can put him to bed early. Inshallah. And I am looking forward to Thanksgiving in a new town with friends and family. I am going to cook again, but this time I will enlist help and lots of wine. If the food doesn’t turnout there’s a good Chinese takeout place nearby. I’m ready to make new memories here. Inshallah.

Jamie was an art historian, wine enthusiast and blogger in her former life and now enjoys being a stay-at-home mom with her toddler son. She occasionally writes on her blog High Heeled Traveler, and shares her daily #todderlife, cooking and wine picks on Instagram @highheeledtraveler.