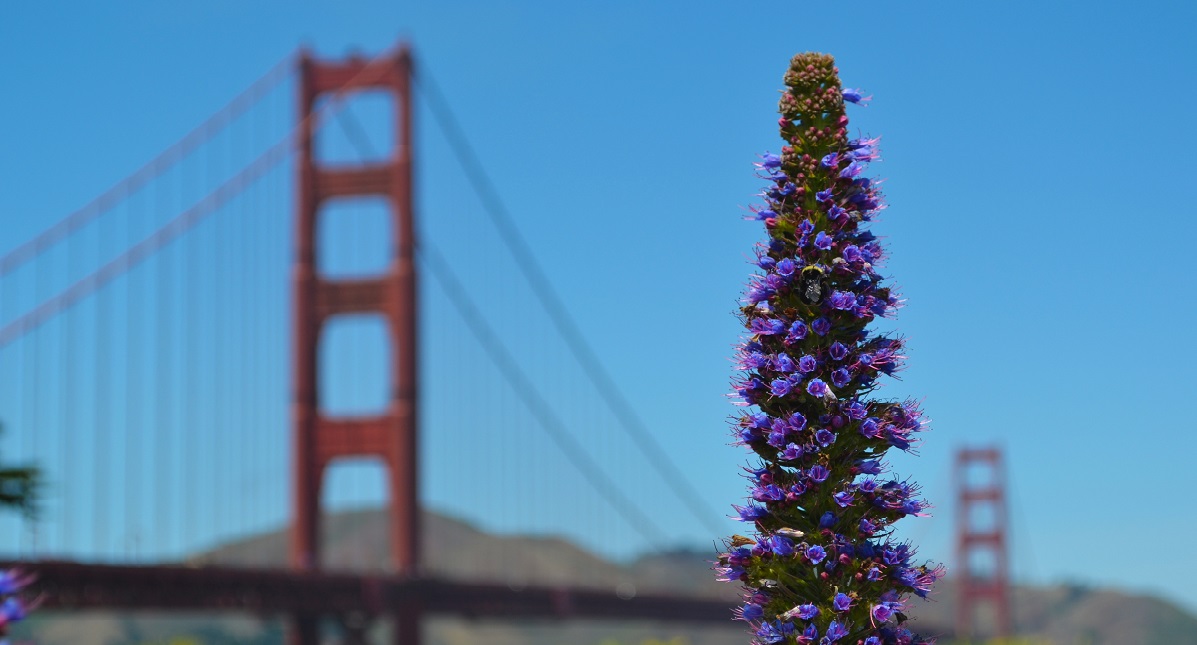 We walked underneath, hearing the cars rumble above, the roar of engines echoed from the bridge. The sound was in stark contrast to the solitude and peace I felt in holding her hand. My daughter and I had spontaneously decided to walk the path to the top of the Golden Gate Bridge. It was a diversion from our originally planned destination, inspired by shrieks of joy upon seeing the bay waters and an urge to explore.

We had pulled over along the road and found a small parking lot with a trailhead that followed the flow of the bay, the waters of the Pacific lapping at the feet of the giant megastructure. As we walked along the sandy shoreline, she paused to write her name with a stick in the sand, scrawling out ‘Nellie’ in wavy childish letters. She chased crabs back into the rock crevices as the waves softly lagged at the shore.

When we saw the trailhead, she said “let’s go to the top”, and we looked up at the looming structure above. It felt insurmountable in it’s intimidating height and grandeur, especially with a small four-year-old with tiny legs and a wavering constitution. Nevertheless, we began our ascent and she never complained- it had become a mission for her, a challenge in which she would not accept defeat. She was determined and fearless: two of her characteristics that normally drive me crazy but today were a huge and admirable asset.

On the way up, we chatted about the plants on the side of the trail, laughing about the name of the Sticky Monkey plant and smelling coastal sage by crushing a bit in our hands. We observed tourists racing down the hill on bikes, zooming by so quickly that the scenery must’ve been a streaky blur. All of this helped to distract from the sheer physicality of walking uphill nonstop.

As we rounded a last bend, a final curve on the twisting path, we had finally made it to the top and our peaceful journey now met up with a swarming mass of noisy crowded tourists, all of whom had parked at the top and were now voraciously taking pictures and selfies. We looked at the bridge and, although it was impressive, we realized it’s a view we see quite often since we live in this area and make the drive across the county line into the bustling city frequently. The view from below when we started, was much more of a rarity, more unique and less discovered.

I felt a little let down and Nellie must’ve shared the same disillusionment because her face looked confused and her upbeat spirit had dwindled a bit. She then proclaimed with resignation, “Well, now we get to go down” and immediately started the journey downhill, skipping down the serpentine path, racing around corners and laughing at the wonderment of gravity. We quickly left the crowds from above and raced back to our original starting point.

As we got back down and met the waves once more, crashing against the rusty orange pillars of the bridge, we paused and looked up again at the underbelly of the beast. Being below it looked so much more massive, more gravity defying. We both stared quietly at it, having new appreciation for climbing under it’s long outstretched body and draping cables. I reflected on when this bridge was our route to the hospital, when my husband and I drove across it at two a.m. to deliver Nellie. This bridge connected our home to her new arrival. I recalled how welcoming those giant orange arms felt in the still hours of the night, embracing us into the unknown we were entering.

And now, four years later, here I am with my little buddy experiencing a journey together on a bridge we’ve traveled over numerous times, and one very special time four years ago in the middle of the night. And all the time, reminding myself that it’s not about the destination, it’s the journey, and the journey is so much more enjoyable and genuine when it’s off the beaten path, and when it’s with a little friend.

Allison Kegley had her daughter five years ago, and she felt like every moment went by so quickly that she wanted to always remember every event, every emotion. She’s been writing articles about parenting for the Marin Independent Journal over the last five years. She lives and works in San Rafael and teaches by day, writes by night, and somehow parents in-between.