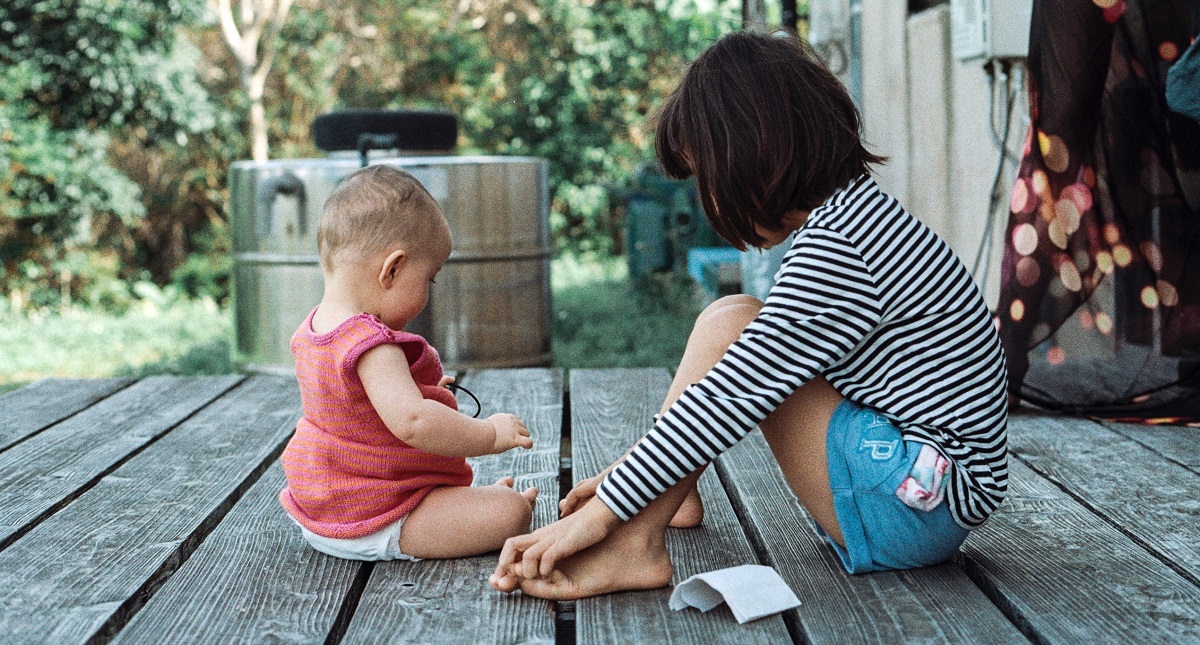 So that makes for a four-year gap, a three-year gap, and a seven-year gap in our family dynamics.

I vividly remember in those first few weeks after bringing the twins home that I felt like I had two sets of kids. My big kids and my twins. The thought and realization made me feel both overwhelmed and sad, and I just kept wondering if I would always feel that way.

In those early months, parenting twins was obviously very demanding of my time, energy and emotions. I felt like I had very little leftover for the bigs, and they were constantly missing out because nearly everything was so logistically challenging.

I should pause here to say that not every mom with large age gaps feels this way. I know plenty of moms who can just roll with it and bring baby in tow, no matter what the family is doing. They’re not stressed about it, and it’s just how they naturally operate.

I am not one of those moms. And if you aren’t either, it’s OK. I get it. I’ve been there before, and in many ways, I’m still there.

However, I am glad to say that our family is constantly moving ever closer to that goal of functioning as one big family with four kids. But to be perfectly honest, I think those days are still a long way off though.

That may sound discouraging, but I say that because I have this vision in my head of family game nights someday when we can pick any game in our house because everyone will finally be old enough to play together. My son won’t be bored with Candy Land. My daughter won’t be frustrated with a game that’s too advanced, and the twins won’t be making mischief and disrupting the game.

But you know what? I’m not allowing myself to be discouraged by this anymore. While I’m looking forward to the day when this vision plays out, I’m also trying to embrace where we’re at now and find ways to make the best of it. I’m still figuring this whole thing out, but here are a few things I’ve learned along the way.

Whatever stage we find ourselves in is not forever.
I’m not in infant survival mode anymore trying to tandem breastfeed twins while also trying to be a good mom to my big kids. It has gotten easier, and things that were essentially impossible during those early stages are more realistic now.

It’s OK to split your kids up for certain activities.
Don’t feel like you have to force something just so the whole family can be together. We don’t want our big kids to miss out on certain things, so many times one parent will stay home with the twins while the other parent takes the big kids to go do something fun that may not be so appropriate for two 2-year-olds. Also, sometimes we let our big kids stay up a little late for a game night, to watch a movie, or to watch Texas Aggie football games.

Mealtimes are essential for quality time as a family.
This is huge! We are borderline militant about having dinner together as a family every night, even when we have evening activities. It doesn’t matter if the meal is a little early, late or rushed, we make it a priority to sit down as a family with no electronic distractions. I see this as the most important way we can accomplish togetherness and build that unity as a family.

Nap time is an ideal time for quality time with older siblings.
Admittedly, this is hard. When you finally get the littles down, it’s your chance to get stuff done, but this is a great time to spend one-on-one time with the older sibling, especially if other kids are at school. It doesn’t have to be for the entire nap, but dedicated, quality time can go a long way.

Be involved in your kids’ activities as much as possible – don’t just drop them off.
The time spent in the car and during the actual activity can provide great quality time and teachable moments where you’re not distracted changing diapers or managing a toddler meltdown.

In closing, just know there are challenges and benefits to every age gap. Wherever you find yourself in the journey, just press on and keep pouring into those precious lives the Lord has placed in your life.

Nicole Priolo proudly carries the titles of wife, stay-at-home mom, twin mom and blogger. She is passionate about marriage, motherhood and creating a Christ-centered home. Living in the chaos of raising four young kids with her husband, she strives to find ways to simplify everyday life and share her journey with others on her blog, Pursuit of Simple, as well as on Pinterest and Facebook.