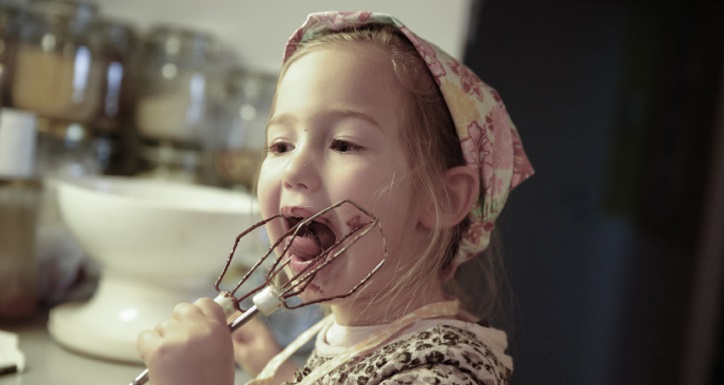 I am not the kind of mom who likes disorder. Seeing items scattered around the house instead of in their assigned space makes me break into a cold sweat. Frequent usages of my time include organizing the fridge, discarding clothes not worn in the past year, cleaning out the craft shelf and spending hours every week putting away toys that will be brought out again the next morning.

My husband, a very efficient though also, in my opinion, untidy man, often raises the senselessness of these actions:  “Why are you wasting time cleaning that stuff? You know it’s all coming back out again tomorrow, right?”

I see his point but I can’t help myself. Clean house, clean mind, I think to myself, as I ignore the pleas of my children to push them on the swings so I can spray and wipe the counters more time.

Last Tuesday, as I attempted to blow dry my hair, start dinner, and get my older two children ready for their first piano lesson, I walked by the kitchen and noticed my almost six year old, Jane, pulling bowls, spoons, and various pantry items onto the kitchen table.

“What are you doing?” I asked suspiciously, trying to keep the anxiety out of my voice. We had to eat, clean up, look halfway normal and leave the house within 45 minutes.

I took a deep breath. The typical me would say no way, there is no time for this mess, swoop in and clean up. I would tell her to try this mysterious recipe some time in the future (which, if I had my way, would never actually arrive.) But lately I have been worried that my desire to always have the house neat and orderly has been taking precedence over my children’s curiosity and creativity. Their Montessori school encourages autonomy and independence and letting kids create without adult interference and here was a reasonable way to let that happen. I eyed her ingredients (so far, a box of Annie’s Cheddar Bunnies and a carton of skim milk) and said “Sure, go ahead. I can’t wait to see how it turns out.”

I watched nervously as she stirred the bunnies and milk together. When she asked me to heat the oven so she could bake this milky, mushy mess I said no problem, but suggested that some flour and an egg might help it stick together better.

My stomach rolled a bit as I spread her sludge into a pie pan and even more when she said “You know what? I’m going to frost it when it’s done cooking. With that new apple flavored yogurt you bought yesterday!”

While she watched her masterpiece harden through the dirty little oven window  (one area of the house I have obviously neglected) the look on her face made me realize that sometimes the chaos and mess is totally worth it. I ran around flinging bowls of macaroni and cheese at everyone while she carefully “frosted” her “cake” and then decorated it with plastic mini-pirate swords leftover from her last birthday party. We had five minutes left before we had to leave the house. Spilled flour and milk dotted the counters. My daughter was brimming with pride.

“Ta-da! It’s done!” she beamed, holding out before her what appeared to be a quiche dotted with bunny crackers and smeared with white yogurt.

I told her I was very proud of her for inventing a dish all on her own. I inwardly reminded myself to stop worrying about messes and start letting my children be children. And I found creative ways to avoid tasting a bite of what she proudly deemed “cheddar cake.”

My husband, the untidy man who likes to lecture me on efficiency, took one for the team when he cut himself a large slice after work and took a bite. I hid my face in a cupboard to laugh silently at the look on his face. As a dad who notices goodness more easily than I do, he had no problem swallowing several forkfuls and then smacking his lips in a convincing manner.

“Mmmmm!” he enthused, giving the chef a thumb’s up. “I can really taste the bunnies and the flour!”

I discreetly scraped the rest of the mess into the garbage after the kids were in bed that night. Some things are still better after they are put in their proper place.