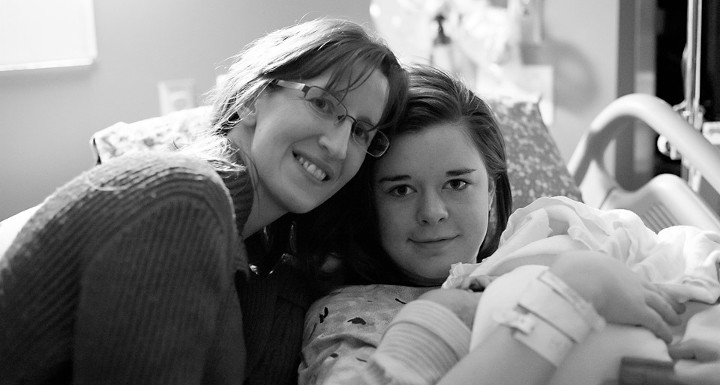 Every Thursday this month, we are going to share the story of a mom who is changing the world. Because, together, we moms change the world on a daily basis with every meal, every hug, and every good night kiss.

In big ways and little ones, mothers shape the world. Over the next few weeks, we will honor the stories of ordinary moms who are doing extraordinary things. We are inspired by their stories, and we think you will be too.

When Angela Klocke was thirteen, she met a guy. He was older,and Angela thought she was in love.

“I grew up in an abusive home and I’d had enough,” Angela says.”At that time we had no electricity or running water. I used a bucket for a toilet.”At 13, she thought this guy would rescue her; she sees now how desperate she was for an escape.

So when she discovered she was pregnant at 14, she thought everything would be okay. Angela always knew she wanted to be a mom.Her mom kicked her out of the house, so she moved in with her boyfriend, and they were married a few months later.

A week before her fifteenth birthday, Angela Klocke gave birth to a baby boy.

“His biggest mistake was leaving,” she says.”Every time he left, I got a little stronger. I trusted myself a little more.”

Finally, when Angela was 21, he came back for the last time.”He showed up at the restaurant where I worked,” she said. “And I told him I wanted a divorce.”His behavior quickly escalated, and customers called the police.When he left, Angela hurried to a friend’s house, where her children stayed until her shift was over. It was not long until her estranged husband knocked on that door as well. This time he had a gun.

Her friend’s husband called the police, but they were too late.Shots were fired, and by the time the police arrived Angela’s husband was dead on the front steps, shot in self-defense by her friend.

At 21, Angela Klocke was a widow, a mother of three small children, and a survivor of domestic abuse.

At Choices, a crisis pregnancy center in Woodland Park, Colorado, Angela shares her story with every new client she mentors.

“I tell you this so you will know I’m not judging you,” she tells each girl. “I’ve been where you are. I’m here now because I want to help you.”

Angela mentors pregnant teens and teaches parenting classes at the center.While the clinic is open to all women, she requests the youngest clients because of her experience as a teen mom.She shares her phone number with every girl and connects over social media, hoping to build a relationship with them. “It is my goal to build their confidence as a parent and a young mom,” Angela says. She teaches how to make healthy choices in pregnancy, birth, and parenting in classes offered through the center. Because teenagers have difficulty thinking through long term decisions and consequences, she asks questions to help them consider how they will handle future parenting decisions.“Most girls know they are having a baby,” explains Angela. “They don’t realize that baby will turn into a child, who will grow into an adult.” She tries to help young mothers grasp a larger view of motherhood.

Angela, now an accomplished photographer, writer, and speaker, also volunteers her talents as a photographer to the center.Clients earn points through participating in parenting and prenatal classes, and they can cash in their points for pregnancy and newborn photo sessions.”I love to ooh and aah over them,” Angela says.She loves to tell the girls how beautiful they are, and what good mothers they are in the first weeks of motherhood. She knows many of her clients will not hear praise or compliments elsewhere, and often are in situations similar to her own as a child and young adult.

Angela devotes her energy and talents to the pregnancy center now, because she says there were a few key people who gave her hope in her darkest days. As a teenager, she was desperate for a kind word or positive attention and is quick to offer it to other young mothers now.

“I had a nurse who was amazing,” Angela remembers.”Her name was Nancy. When I had my son, she kept telling me everything was going to be okay, and I believed her.” A few years later, Angela also had a boss, an editor at a local newspaper, who saw through her grim circumstances and offered her a job.Her editor’s confidence in her talent helped Angela believe she could accomplish more in her career, and she began to set goals for her future.

Angela’s youngest child is now older than Angela was when she became a mother. Still, she continues to use her traumatic experiences as a young mother to offer hope and reassurance to girls in a similar position.She hopes she can help give them the confidence and foster the sense of community she never had as a young adult.By sharing her story and serving young pregnant mothers, Angela Klocke is changing the world, one mom at a time.