My Shelter in Hard Times 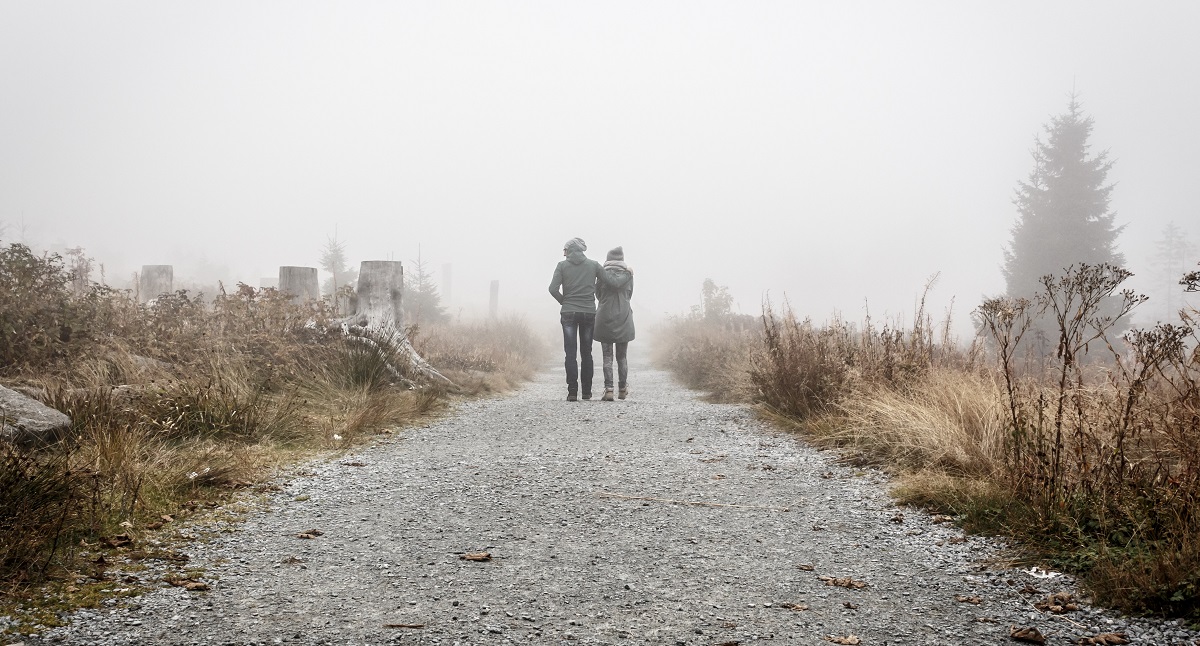 It was as if I’d known those eyes for a thousand years. They connected with mine, in a mysteriously comforting blue moon way. They reduced my fears to mist.

I slipped into my white satin dress and dainty shoes and confidently grabbed my fiancé Lynn’s tuxedoed arm.

It was 12 years ago. I believed we were waltzing down the simple aisle of marriage, carpeted in flower-filled, latte-sipping mornings, seated in peach-kissed light, surrounded in uplifting conversation.

I figured we’d continue mountain biking, hiking, traveling, and working. I imagined discussing politics late in the evening while rocking our nicely behaved children in our cozy cute home with the picket fence.

But three months after the wedding, reality swept me from our little home in the Northern California redwoods. We left my favorite place in the U.S. and sped across the country to Lynn’s new job in bustling New York City. We decided I should get pregnant. A year later, my stomach began to blossom, and I developed painful cramping, bleeding, and then contractions starting at 21 weeks of pregnancy.

I was a hormonal lump of worry. Lynn was calm. “It’ll be just fine,” he always said.

Eventually, I gave birth to an infant with a complex congenital heart defect who needed immediate open-heart surgery. Lynn and I moved in to the hospital, sleeping by our baby’s side. After surgery, our baby healed quickly. Then he became sick again. I stopped working. I cried a lot. Lynn and I became hospital bums, carrying toothbrushes everywhere, sleeping anywhere. We snoozed on benches and cots for weeks. “What if he dies?” I asked Lynn.

“He won’t die.” Lynn was still an optimist; a practically fearless financial trader and former football player who had learned to push through most everything. I was a risk-taker, but also an artist. Sensitive. Empathetic. Visual. His optimism made no sense to me, and my tears baffled him.

Usually, when people didn’t understand me, I got mad. I hid. But in the hospital, I had nowhere to go. I was flooded with the honesty of fluorescent lights and the shrill reminder from a heart monitor beeping that life was precious.

I couldn’t run because my heart simply refused. And so Lynn and I trudged through the hard feelings, and we took time to talk and listen. We learned about how we dealt with conflict, differently, yet together.

We fell in love in a new complicated way where weakness, strength, questions, doubts and suffering built us a new kind of home, woven from the inside out.

Not much later, two more babies were born, and our oldest boy continued to suffer in ways too complex to chronicle here. I developed severe insomnia. At 12 months old, our middle boy contracted a tick-borne disease that almost killed him overnight. And so we began to build on to the powerhouse of walls that we’d already raised in the hospital.

Our house strengthened and grew in understanding, hardship, advocacy, tears, laughter, longing, sweat, humility, fear and sleepless nights. Our shelter expanded in mistakes, forgiveness, surprising friendships, enemies, shame, honesty, fear and faith. Our dwelling did not have a picket fence, but was surrounded by therapists and hospitals and doctors and pastors and friends at times. Other times it floated in isolation, housing the depressed, the lonely, the forgotten, drifting on its own with my husband and I inside, embracing.

And from those first steps down the aisle, to the days in the hospital and onward, such beauty grew. Our house headed upward, never reliant on the state or town or health or weather or situation it was placed in.

Today our house has a roof, and if I close my eyes, it appears to be shaped like a steeple. It climbs toward blue space, never holding still. It grows higher with each struggle and with the hope that shoots up after.

It takes us to places we cannot predict. It arches over us, holding us together. It enlightens us because we have been willing to stay in our house, together – in awe and gratitude, forever.

Amy Aves Challenger is a writer and artist focusing on topics relating to the marginalized, families and children. She has been published regularly in The Huffington Post and also in The Washington Post, Mamalode.com, and Brain, Child Magazine. Her poems and a short story will be published in an upcoming anthology by Kind of A Hurricane Press. Amy lives in Fairfield, CT where she runs a support group for special needs mothers and also leads a writing workshop. She is writing her first novel about a child with special needs. Her poetry can be read daily on twitter @amychallenger.