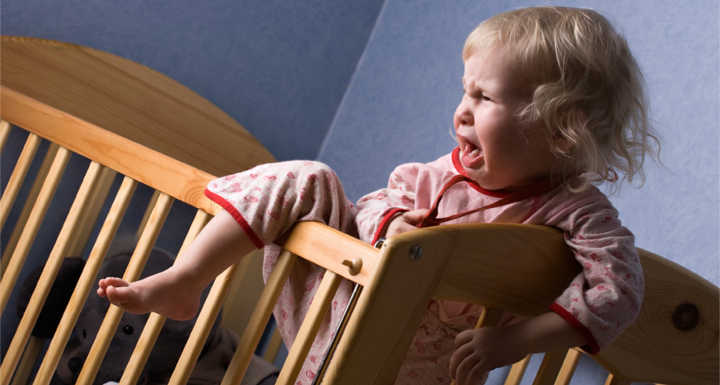 When I was pregnant with my first child, my friend Krista asked me about our discipline philosophy.

Whatta … huh? was how I wanted to reply.

But all she got was a blank stare. Because that seemed like the more eloquent option.

Two years later, my MOPS friend Susan walked me through putting that now toddler in her first-time out. Susan and I were on the phone and life was happening on either end of our connection as it does with moms. My end involved a toddler’s temper tantrum and my own frustration and bewilderment on how to approach this new behavior.

“Put her in the crib. Don’t smile.” Susan instructed. “Firmly tell her no and then walk out of the room. She’s going to scream.”

I did as I was told and two minutes later Susan stopped talking about how she was going to make dinner from something, anything, she could find in her freezer and said, “Okay, it’s time to go get her.”

No rocket science involved. No matrix of crime committed times age of criminal, I mean toddler. No over explaining the offense or the consequence to someone who found Elmo to be the closest thing to a superstar and frequently ate out of the dog bowl at her grandmother’s house. It was pretty pure and simple.

I wish I could say it’s been that smooth since, but no such luck. Here’s the rub. I am an imperfect mother who along with my husband, an imperfect man, is raising imperfect people. Right there is a lot of potential for inconsistent behavior.

Sometimes my patience miraculously lasts through candy demands and meltdowns at the checkout line at Target. Moments when I hope the security cameras catch me on tape. I am that good.

Sometimes I put someone in a timeout for looking at her sister wrong just because I’m tired of the offended sister’s whining. It’s not fair and frankly I don’t care.

Sometimes the consequence pairs naturally with the offense. So textbook it could be written about in parenting books and blogs as a legendary example.

Sometimes, (and this is the worst), I tell my children to stop doing something I frequently do myself. Pretty much the definition of inconsistent there (though there is a case for grown-ups having privileges kids just don’t get yet.)

Every book I’ve read on parenting, every single one, has emphasized the importance of consistency in discipline. So my goal is to certainly, most of the time, to the best of my ability, reinforce how I’ve disciplined in the past. It helps my daughters feel secure if they know what to expect from their mother. I truly work hard to generally offer consistent consequences.

But I refuse to beat myself up every time I veer from the plan. Because if our goal is to raise children who can maneuver through the real world, then our inconsistency in a sense is giving them a taste of that reality. Life doesn’t always offer the same results for the same behavior. It just doesn’t. Generally you commit a crime, you go to jail. You don’t show up for work, you get fired. But not always! There’s the general truth and then there’s the reality of living in an inconsistent world.

So for all of us who struggle with offering that consistent follow through, it’s going to be okay. It really will. In fact your imperfect children may be better prepared to handle the imperfect world they were born into because of that imperfect mother that raised them.

Alexandra Kuykendall
As a mom to four girls, ages 3 to 12, Alexandra Kuykendall’s days are spent washing dishes, driving to and from different schools and trying to find a better solution to the laundry dilemma. She writes to capture the places where motherhood meets everyday life to remember the small, yet significant moments in the midst of the blur. She is the author of The Artist’s Daughter, A Memoir , a contributor to this year’s Be you, Bravely, An Experiment in Courage and acts as the Specialty Content Editor for MOPS International. A city girl at heart, she makes her home in the shadow of downtown Denver. You can read more of Alex’s everyday thoughts and connect with her at AlexandraKuykendall.com.