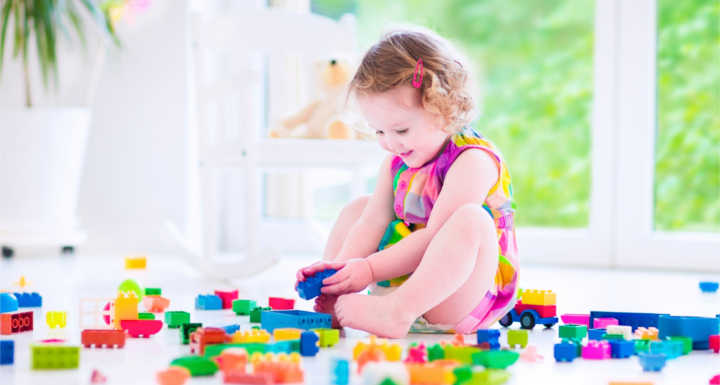 This month we are featuring fun experiments you can do with your baby from the book Experimenting with Babies. Babies are sweet and cuddly and full of scientific experiments. What will your baby teach you?

Conduct this experiment around the time when your baby begins using two-word phrases. By this point in their language development, babies have come to understand that words can be strung together according to certain grammar rules. Gather two objects that differ in color but are of the same kind, such as two bottles, two rattles, or two balls. Show your baby one of the objects, and identify it. For instance, you might say, “Look! A yellow ball.” Repeat this presentation once or twice, then remove the object from view. Next, display both objects at the same time, one in your left hand and one in your right hand. Say, “Now look. Do you see another one?” Make note of which object he looks at, and for how long.

Your baby will look longer at the object that is the same color as the object you initially presented.

This is one of those experiments for which the hypothesis seems pretty simple and obvious, but it has intriguing and wide-reaching implications for language-development researchers.

First, some background: In the 1950s and 1960s, now-legendary linguist Noam Chomsky formulated theories about how language is structured, how we comprehend it, and how we come to acquire it. He argued that certain rules of language are hardwired into the human brain — that is, they are not simply acquired through experience. Detractors argue that children can pick up everything they need to know about language from the speech they hear around them. In a 2003 study, three language-development researchers devised an experiment to test whether babies are able to pick up on an aspect of English grammar that, they argue, the babies could not have learned simply by listening to speech in their environment because it doesn’t occur frequently enough. They presented an object that was described with an adjective-noun phrase (yellow ball). Then, they presented two objects, both of which fit the noun (ball) but only one of which matched the adjective-noun phrase. They asked the babies, “Do you see another one?”

This finding lends support to the idea that this particular language rule is innate, rather than acquired, knowledge. It’s a big win for Chomsky lovers.

Chomsky wasn’t the first to argue that we’re born with innate knowledge. Great philosophers like Plato, Descartes and Leibniz also put forth variations on the idea. (Another great philosopher, John Locke, famously disagreed, arguing that the mind begins as a tabula rasa, or clean slate.) But Chomsky certainly did set off an explosion of research in the field of child development that deals with whether some knowledge is innate rather than acquired. Over the past several decades, studies have shown that babies appear to have an inborn concept of not only grammar but also rudimentary mathematics and physics. These core concepts that are prewired in your baby enhance his ability to make sense of the world. So in your daily interactions with him, don’t hesitate to expose him to unfamiliar words, actions, and situations. They may not be so unfamiliar after all.

Excerpt originally appeared in Experimenting with Babies.Shaun Gallagher shows parents how to recreate landmark scientific studies on cognitive, motor, social and behavioral development — using their own bundles of joy as the research subjects.

Shaun Gallagher is an author of two nonfiction books, “Experimenting with Babies” and “Correlated.” He is a former magazine and newspaper editor and runs the website Correlated.org, on which “Correlated” is based.

Experimenting With Babies: 50 Science Projects You Can Perform on Your Kid shows parents how to recreate landmark scientific studies on cognitive, motor, social and behavioral development — using their own bundles of joy as the research subjects.