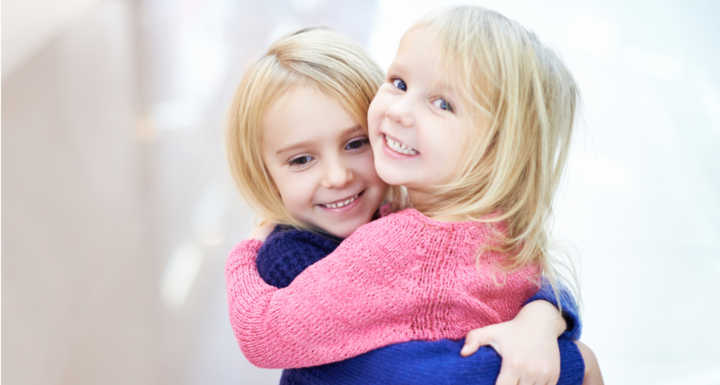 “Bobby make sure your shave your sister’s entire leg, and put the pink boa back when you are done wearing it!”

I am an imperfect mother with imperfect children who sometimes don’t get along. I’d love to tell you my children always share their toys and show unconditional love to one another, that the older ones nurture and care for the younger. I would love to tell you they work out small disagreements without my intervention. But let’s be honest, some days I’m just happy one of them hasn’t eaten the other for lunch. The simplest conflict used to spiral out of control. I was stuck in the awful valley of time outs. It seemed someone was always in “the chair.” Something had to give.

What if I doled out fewer consequences and focused more on the good? Could an experiment that bold ever work? That’s how the Giggle Cup was born.

One morning, while refereeing my children I quietly walked into the kitchen, retrieved a red plastic cup from the pantry and deliberately placed it on the counter. I declared it the Giggle Cup. I explained to my toddler and preschooler every time I heard them playing nicely together, I would put a coin in the cup. The friendlier and more loving they were, the more coins they could earn. However, if I heard mean words, crying, whining or selfish behavior, I would take coins out of the cup. At the end of the week, if we had collected $1.00 in giggle money, we could go to the store and buy something.

It didn’t take them long to figure it out. I would be in the kitchen cooking and hear my four-year-old say, “Just laugh really loud, Mary Elynne.” I didn’t mind them gaming the system. At least they were working as a team! We had a few moments which included statements like “I’m happy, can I have a penny?” Luckily for me, neither one of them could count money yet, so I had some discretion, a little “wiggle in the giggle,” if you will. At the end of the week, I deemed they had earned enough to buy brand new bubbles. I challenged them to earn two dollars the next week so we could get ice cream at the drive thru.

We had a few “dump the cup” moments. But I began to see a transformation. When I began to celebrate their love instead of punishing their disdain, I shifted their perspective — and mine, too.

Fast forward a few years, and add a third child to the mix. The Giggle Cup had found its way back into the pantry, replaced by the maturity of older children that didn’t need gimmicks to make good choices — or so I thought. In the busyness of everyday life, ugly habits of old had started to return. The object of the arguments had changed, but the tone was the same. I had seen this pattern before, but now I knew what to do. We needed a Giggle Cup 2.0.

My children were older now. It was no longer my job to celebrate their relationship. When I found them pushing the limits, testing patience or being unkind, I would ask them to write a letter to one another celebrating what they loved. It could include a favorite memory, something they loved doing together, or what they love most about their sibling. Spelling and grammar didn’t matter. In fact, they could even draw a picture and explain it out loud. What commenced was the most amazing, heartfelt, creative and hilarious interaction our family had ever had. We pealed with laughter as my daughter shared her favorite memories of Disney World. We cackled as my oldest son told his sister she had really nice hair. And my youngest son would sit and listen, sometimes interjecting a compliment that could only be given by a two-year–old, sending us roaring into giggles.

What if I shelved the ugliness and celebrated our love? It took a plastic cup, some creative accounting and a few pieces of paper, but I had found it. When you celebrate what is good, the good multiplies. It’s just that simple.

So, why is my son shaving his sister’s legs wearing a pink boa? Let’s just call it Giggle Cup 3.0. We adopted a new way to honor our family bonds this year. When the kids find it hard to get along, they have to choose an activity from the Giggle Cup. It is filled with outrageous tasks like shave your sibling’s legs with a Popsicle stick and shaving cream or do the chicken dance. The rules — you must complete the task with your sibling. No arguing or fussing is allowed. The task must be repeated until you have fun doing it together! Some days, I think they pick a fight with one another just so they can pick from the Giggle Cup. We chose to leave the place of blame and criticism, and honor all that was beloved about our family.

This originally appeared in Hello, Dearest Fall 2015. If you didn’t get a copy and would like your own, you can subscribe to get Hello, Dearest in your mailbox every season. If you subscribe, forward your receipt to magazines@mops.org and we’ll shoot a copy of the current issue in the mail to you for free … just because we like you.