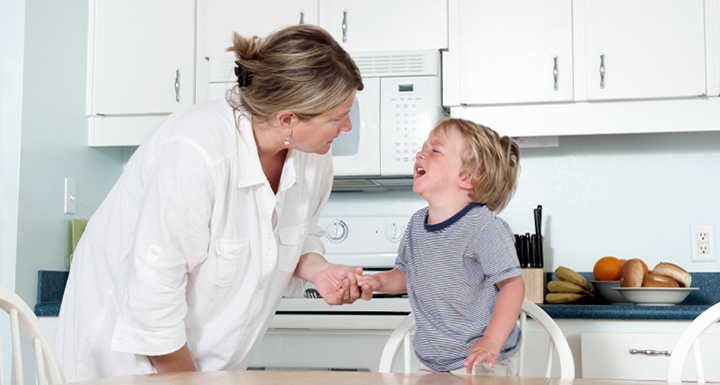 He’s looking at me with that look in his eyes, the one that holds the monsoon. The tears are coming, the fit, the fight. I think about just giving in, giving him another snack before dinner. I see his lips pucker into a deep frown deep and I almost say, “Forget the snack! Why don’t you just take the bag of cookies and go to town!” The thoughts cross my mind because at some point, at this point in the day, my mind is weary of fighting.

It’s like I’m living in a constant state of deja vu. I could swear that we just had this discussion, we just fought this battle, because we did. Maybe not over this exact issue, but the battles, even when I pick them, run together like the tears on a stubborn preschooler’s face.

The frustration threatens to seep out of me like the steam coming from the dinner I’m preparing on the stove. It’s there just under the surface and it fogs my vision. It’s built up throughout the day, comprised of the hours that my daughter didn’t sleep at nap time, the toys that her brother took from her, the errands that didn’t get run and the opportunities that I missed to be super mom. It’s all led up to this moment, the one with my sweet little boy who thinks that waiting ten minutes for dinner is the worst news he could ever receive.

I try to explain to him that dinner will be worth the wait and that ten minutes isn’t that long. I try to tell him that I made his favorite kind of rice and wouldn’t he like to save room? I tell him that now’s his chance to choose obedience and to listen to me, that he should choose to be happy and choose self-control. I look up from stirring and as I see his face, it’s as if time stands still.

There he is, looking up at me with the stuttering breath that comes from holding in your tears. His emotions are trying to pound their way out of every part of him, but he fights it. There’s my little boy, fighting for control, fighting to choose joy and obedience in the midst of disappointment. And there I am, presented with a choice. Would I do the same? Would I forget the fact that I couldn’t make dinner in peace and take the moment for what it was: a miracle unfolding?

This simple moment had the potential to be one of two things. It could be shuffled over into my frustrations column that I would wave around like a hall pass as an excuse to be in a bad mood later. Or it could be something else altogether. It could be the crowning jewel, the victory at the end of a day of battle.

As my son worked to do what I asked, worked to submit, the frown lines of his face smoothed away and he opened up into contentment like a love note being unfolded. As the storm passed and the sun returned to his eyes, I caught a glimpse of his becoming.

He had blossomed just a little, a tiny petal falling open revealing the good stuff on the inside of him. It had taken repetition and persistence. Dinner would be a little later than I had planned and my to do list was still just as long as it had been that morning, but here in this moment, something sacred had happened. His heart had softened and he had answered the call of wisdom. He had said no to selfishness and had decided not to give full vent to his anger. He had submitted. He had obeyed, and I couldn’t be more proud of him.

The unfurling of a rose is as common as a sunrise, but it never ceases to amaze and mystify. We all accept the way that something so powerful and fragrant and lovely could be shut up tight in a little bud, but it’s mind boggling all the same. For months it pushes its way up and out. It lives day after day each seeming just like the one before until one day, its petals begin to fall into place and the sun can shine down on the goodness that had been shut up inside.

Similarly, my son’s heart slowly opened into the realization of the power of choosing wisdom and truth. Our common interchange had transformed into one of sacredness and beauty. In the battle over snacks, a far greater victory had been won, a victory for the beauty of his heart. The secret potential that was closed up tight had begun to fall open and the power of that is stronger than the fragrance of the most beautiful garden.

As his heart blossomed just a little in that moment, mine did too. The beauty of his becoming awakened gratitude and awe in me and I looked at my day with new eyes. Before this moment, I had seen it as a barren field, void of accomplishment and wholly unadorned, but now, well, now I stepped back and saw it for what it was. This day, and all the others that I’ve spent mothering have indeed been a field­–but not a barren one. No, in this vast field made up of days upon days, there are a million little seeds tucked just below the surface, the seeds that comprise my children’s hearts. In the moments that I least expect it, they poke their green shoots up and bloom. They grow and spread and fill my days with goodness and the beauty is unmatched.

I dish up the food and offer it to my family. They eat the simple meal and my son asks for seconds of rice. He smiles as I put his plate back down in front of him and as I watch him fill his belly with the food he couldn’t wait for, I decide that I will search for the blooms that each day holds. I pray that I don’t miss a single petal’s unfurling and that each time, as each seed reveals it’s goodness and beauty, it will be a grand reveal that strikes me with awe. I pray that I can hold off the frustration just long enough to see the beauty that comes from persistence.

Kelsey is a wife and stay and home mom in Colorado and is passionate about people, especially little ones in footy pajamas. When she isn’t drinking coffee, reading the same children’s book for the tenth time, or devouring books on American history you can find her blogging over at glowliveaslight.com and filling up shopping carts online with stuff that she never actually buys. She has recently launched her own personal blog called whilewemother.com, a blog to encourage and inspire.