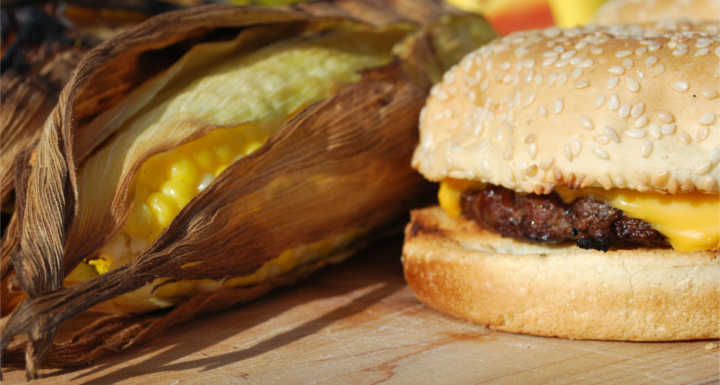 Trent came home one day to find me crying on the couch about the living room—about how off-kilter and ugly it looked with our second-hand furniture—and I hadn’t eaten since the night before.

He put his arms around me. “Let me make you supper,” he said—this farm-boy I’d met, who drove a car he called The Beast and volunteered at kids club.

I nodded, kissed him. Grabbed a bag of marshmallows and headed into the office to paint at my easel.

Half an hour later Trent called me for supper. He had made burgers, corn on the cob, and “fancy” salad (which is what he calls salad with grated carrots, cheese, onions, bacon and croutons).

I emerged from the office, my mouth white, the marshmallow bag empty. I sat down at the table, looked at the plate full of food, and said, “I’m not hungry.”

I don’t know why he didn’t leave me then and there.

I’d been so hungry I’d stuffed myself with marshmallows, instead of waiting half an hour for food that would sustain me.

All I could hear was the scratch of Trent’s fork on his plate as he ate.

It was the beginning of a three-year relapse into anorexia which would nearly wreck our marriage, and it wasn’t until we left our jobs and moved to Korea that I would begin to eat three meals a day again.

Because sometimes it takes moving to another country to see what you have right in front of you.

I’m better now. I’m eating now—I never skip a meal, and I have two little boys whom doctors said I’d never be able to have, because of the damage anorexia did on my body.

And I’m wondering how many of us settle for the marshmallows when what we’re really hungry for is food that will last?

How many of us, sisters, sit down with a pint of ice cream after a stressful day, or binge on Oreos after the kids go to bed? How many of us try diet after diet but end up filling up on junk because we’re just so hungry?

I think of Jesus at the well, with the Samaritan woman. He asked her for water, and then in return offered her life anew.

Because this is what we’re hungry for, isn’t it, friends? A love so deep and long and wide and high it fills every crevice of our souls; a kind of love that would die for us, a kind that sings over us, a kind that walks through fire with us?

But it’s not a bag of marshmallows. It’s not fast fame or fleeting praise or accolades.

No, it’s a slow cooked meal, and we need to wait, to be patient, as this is the kind of love prepared by a gentle pair of hands which feeds your soul.

Trent still makes me fancy salads. He still makes burgers and corn on the cob, and I no longer eat marshmallows. Because I’ve tasted real food, and there’s no turning back.

There’s no turning back from love.