Moms Who Change the World, Part One 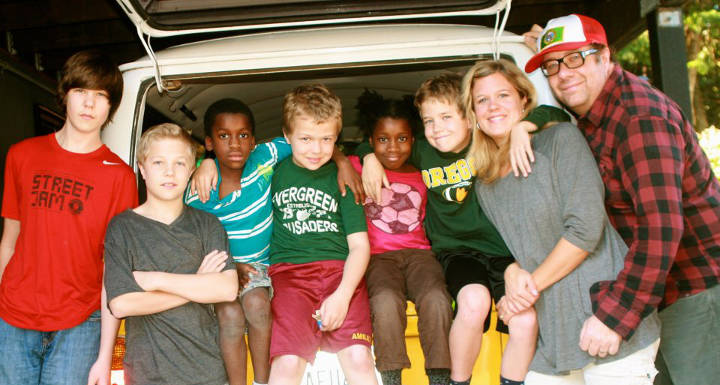 Every Thursday this month, we are going to share the story of a mom who is changing the world. Because, together, we moms change the world on a daily basis with every meal, every hug, and every good night kiss.

In big ways and little ones, mothers shape the world. Over the next few weeks, we will honor the stories of ordinary moms who are doing extraordinary things. We are inspired by their stories, and we think you will be too.

Jody Landers never dreamed she would change the world. Or maybe that was exactly what she dreamed.

Her story begins in Sierre Leon, Africa, where she was adopting three-year-old twins. “There was a moment when we were pulling away on the boat with the kids that I thought, ‘Oh my gosh. This is so much bigger than adoption.’ “Jody says. As she left the region to bring her children home to Iowa, Jody had an all-consuming thought. “If I was going to have the privilege of raising these kids, my life would also be committed to creating a world where the adoption of orphans is not necessary.”

She and her friends gathered in living rooms and shared their passion for serving others while their children played. Knowing how easy it would be to focus inward while caring for little ones, they challenged one another to continue to look outward. “The first step is to surround yourself with like-minded people,” Jody says. Together, they looked for small, local projects, like collecting backpacks for foster children in their community. Then one day the need for clean water in Africa came up during their play group.

“One year we gave up part of our Christmas and raised support for Charity: Water. We ended up raising a lot of money. And it just snowballed from there.”

In fact, they raised so much money, Jody was invited to go to Liberia to witness the difference their contributions made. While in Liberia, she met Becky Straw. “I was completely intrigued and inspired by her,” Jody says.”She had the education and experience that I lacked. I remember just drilling her with questions in the back of the jeep.” Jody and Becky continued their friendship after returning home. In time, Becky had an idea, and approached Jody. And The Adventure Project was born.

Jody has lived out the convictions that first gripped her on a boat in Sierre Leon. By giving women in the poorest regions of the world a means to earn an income, she is working to end the extreme poverty that often leaves mothers unable to care for their children. More mothers can support their children, and fewer children are separated from their original families.

Jody Landers is changing the world by giving women in impoverished areas a way to care for their own children. And that is every mother’s dream.